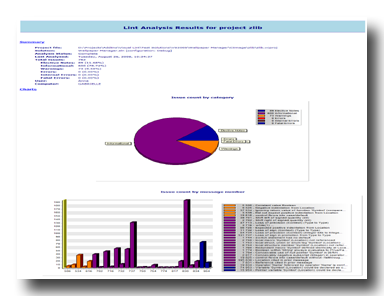 LintProject Professional is a command line product intended to make the process of using static code analysis tools with C/C++ projects a little easier and more productive. It replaced the previous LintProject tool, extending greatly the level of detail included in the generated reports and providing far greater compatibility with C/C++ project files.

Like Visual Lint, LintProject Professional uses third party static code analysis tools (Gimpel PC-lint or CppCheck) to perform the analysis. As such, you will need a valid PC-lint or CppCheck licence and installation in order to be able to use this software. CppCheck is open source and can be freely downloaded from http://sourceforge.net/projects/cppcheck/.

PC-lint analyses C++ code to identify potential problems. By comparison with a C++ compiler such as that provided with Visual C++, it is highly customisable and very thorough, but (understandably) significantly slower.

The output it produces is file based and directed to the console by default, for example:

Although PC-lint does a great job of analysing C++ source and header files for potential problems, it is a generic cross-platform tool and as such its integration with development environments is limited. For example, when used with Visual C++ PC-lint can be used to scan the current file for warnings and direct the results to the Output window, or to scan a list of files defined in a text file.

While this level of integration is perfectly adequate under some scenarios (for example when developing new classes), it is less than ideal if you want to perform a complete analysis of an entire project or solution. Furthermore, since PC-lint does not provide any means of generating useful reports on the results it can be difficult to spot potential problems amongst the mass of results.

If you are working with a large project these limitations can make using PC-lint to analyse your code time consuming and difficult, which can potentially this can be a real disincentive to using this very useful tool on a regular basis.

As a result, the quality of your code could well suffer.

LintProject Professional can be run against either a complete solution/workspace or an individual project:

Whilst the availability of text files containing the results of the analysis is an essential result of the process, without a means of summarising their contents and indexing them the process of interpreting the results is likely to be slow and laborious.

LintProject provides a convenient solution to this problem by writing HTML reports (in a very virtually identical format to those produced by Visual Lint Enterprise Edition) which contain a detailed analysis of the results files and indicate which lint issues were found within each implementation file, project and solution:

A key design aim of LintProject Professional was to be capable of indicating its process whilst it ran. This is especially important when you consider that a PC-lint analysis of a large project can take some considerable time on some systems. To achieve this aim, the output reports produced by LintProject Professional are automatically regenerated as the analysis progresses.

Once installed a LintProject Professional command prompt can be easily run from the supplied shortcut which temporarily adds the path of the installation directory to the system path. The /folder switch can then be used to tell it where to find the PC-lint executable.

LintProject Professional is invoked by a simple command line, for example:

There are a number of additional options, for example:

/configfile="<FileName>"
Specifies the filename of the lint indirect file to use. If omitted, std.lnt is assumed.

/config="<ConfigName>"
Specifies the solution configuration to be analysed. Similarly, /config? will list the available configurations.

/save
Saves the current PC-int installation folder settings to the registry so that /toolfolder and /configfile can be omitted next time LintProject Professional is run).

/showreport
Specifies that the HTML report should be automatically opened in a browser window when analysis starts.

/param="<parameters>"
Passes the following parameters to the analysis tool. For example, /param" -background" will instruct PC-lint to perform analysis at a low priority.