Another great ACCU Conference passes, and with it the usual mix of informative and entertaining sessions, great networking, barhopping, and far too much food and (real!) beer.

As ever the schedule was varied, the sessions interesting (for example we attended one on writing Jenkins plug-ins, which is obviously very relevant to Visual Lint Build Server) and entertaining (Tim Lister's bonus lightning talk on "Software projects are hurricanes", or Alan Kelley's passionate rant on software rewrites. It goes without saying that the company was as fun and inspiring as ever.

We learnt a bit more about C++ 11 (my copy of the second edition of "The C++ Standard Library is now resting on my desk alongside Anthony Williams' recently arrived "C++ Concurrency in Action" and Allan Kelley's "Business Patterns for Software Developers"...), a lot about other stuff and generally put the world to rights, using Twitter as our medium, and beer as our lubrication.

There was even a little free pizza and beer floating around - the latter notably during Olve Maudal's "C++ 11 Pub Quiz" which was (rather appropriately) held in the hotel bar.

However, for me the absolute highlight had to be Bob Martin's "A Requiem for C", which was so funny he had us laughing almost continuously all of the way through. The fact that he was wearing a headcam for the whole thing (watching you watching me...") just added to the hilarity. More than one delegate was noted to comment that his nickname should now be "Uncle Borg" rather than "Uncle Bob"...

On Wednesday evening I took the plunge and did my first lightning talk, entitled "Don't let the Big Ball of Mud sneak Up on you". Talking to a room of 400 people with a microphone and a 5 minute deadline is an interesting place to be in, but it was great fun and I'd heartily recommend it if you fancy trying your hand at speaking.

Skillsmatter filmed some of the sessions, so video should be online soon - as will slides from the presenters themselves.

Next up for us should be Agile on the Beach in Falmouth this September.

If you have been following me (@annajayne) on Twitter, you may have noticed me talking about something called "VisualLintGui".

This is actually the second of two projects (the first being VisualLintConsole - the command line version of Visual Lint) we got underway after the release of Visual Lint 3.0.

Now that VisualLintConsole (the command line version of Visual Lint) is out in the wild, we have turned our attention to VisualLintGui. This is, as the name suggests, a standalone Visual Lint application with a graphical user interface - basically a text editor focused on code analysis: 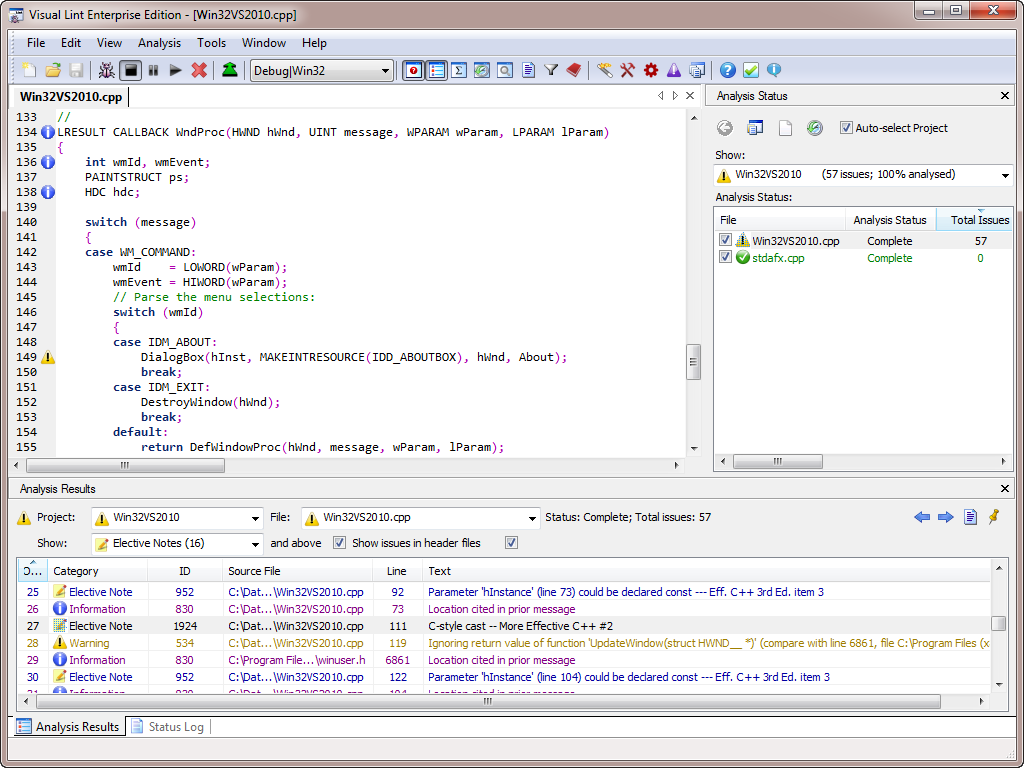 Although it has been fully functional in terms of analysis functions for quite some time, until recently we were not able to devote a great deal of time to the details of its user interface. That has now changed, and since February VisualLintGui has gained many essential capabilities including a syntax colouring editor with analysis issue markers, MDI tabs, Find/Replace and Source/Header flip to name but a handful of the more obvious recent changes.

VisualLintGui is currently capable of analysing projects for Visual Studio, Visual C++, Eclipse, CodeGear C++ and AVR Studio 5.0, but it can obviously potentially analyse a far wider variety of codebases than that.

Indeed, one of the reasons we have been keen to develop it is to provide a way to support embedded IDEs for which developing a Visual Lint plug-in is not a viable proposition. As such we expect to add support for further project and workspace file formats as and when our customers need them.

VisualLintGui currently resides in our Visual Lint development branch, but given the recent pace of development on it we are likely to look at porting it back into Visual Lint 3.5 in the not too distant future.

In the meantime we will have a development build on our stand at the ACCU Conference next week, so if you are going please do come and take a look.